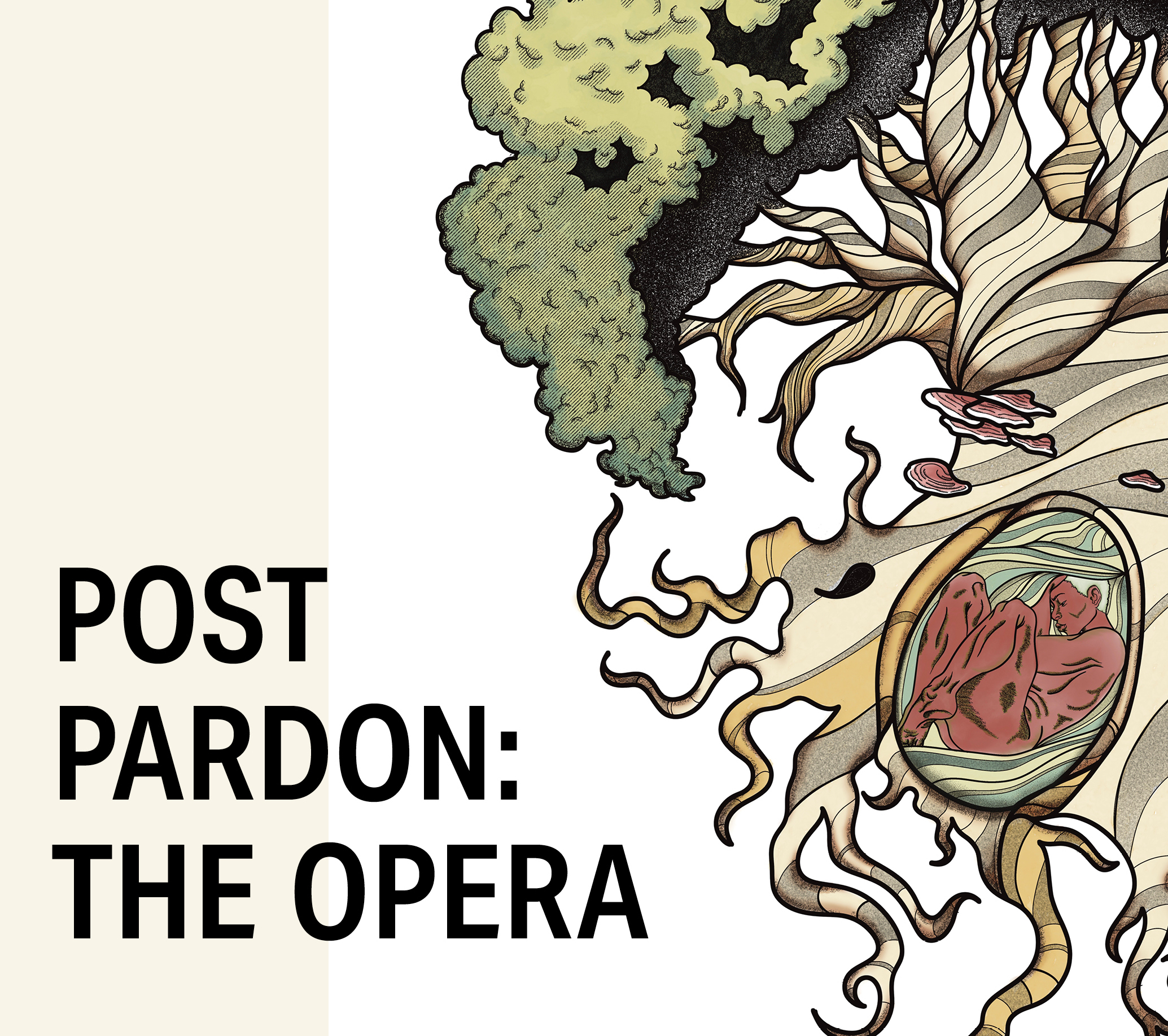 Post Pardon: The Opera was initially supported by a Cultural Funding Grant from the City of Oakland, CA, in 2013-14, for the creation of the libretto and score. The creative team includes librettist Arisa White, composer Jessica Jones, director Ellen Sebastian Chang, set designer and installation artist Dianne Smith, and choreographer Laurel Jenkins. Now in its developmental stage, with backing from Colby College, Post Pardon: The Opera will premiere in 2025 at the Gordon Center for Creative and Performing Arts in Waterville, Maine.

Post Pardon: The Opera is an Afro-speculative transgenerational apology, set between the material and spiritual worlds, where three females’ lives intersect because of a murder-suicide. From the afterlife, a mother attempts to heal her relationship with two daughters, one living and one dead. With its concern for gendered and ecological violence, the opera is a lyrical and mythical world splitting open with a Black woman’s song.

Adapted from Arisa White’s eponymous poetry chapbook, published by Mouthfeel Press in 2011, Post Pardon was inspired by poet Reetika Vazirani who killed her two-year-old son and then took her own life in the summer of 2003. Arisa was struck by these events, having met Vazirani and Jehan Komunyakaa a few weeks prior to their deaths. As a device to non-judgmentally enter the interior landscape of a woman who contemplates murder-suicide, Post Pardon: The Opera employs Caribbean mythologies and West African cosmologies to explore the concept of inherited sorrow.

Jessica and Arisa are approaching opera not as a fixed elitist form, but as a living genre with deep history and ample room for experimentation. Opera is an immersive experience and its ability to move the soul is inescapable—and Post Pardon is soul work. Our collective consciousness is in need of a narrative that opens us up to an interconnected understanding of who we are and our shared purpose. Opera as a form is the necessary volume to bring from margin to center the voices not heard.

The music for Post Pardon is, first and foremost, a reflection of the rhythm, tone, and emotional content of the libretto. It is influenced by avant-garde improv, Buddhist and Hebrew chants, field hollers, and musicians such as Ornette Coleman, Abdullah Ibrahim, Roberta Flack, Sweet Honey in the Rock, the sweeping arpeggios and impressionistic impact of Debussy, as well as Romantic era composers, and the spectrum of jazz in the last century.

To learn more about the first iteration of the opera, visit: postpardontheopera.wordpress.com.

The elements that moved me to write Post Pardon–yes, there are fairies involved!